What Causes Head Pressing in Cats?

You may have seen images circulating around the internet of cats with their heads pressed against a wall or against the floor with funny text that says something like “I can’t do Mondays”. While these pictures may seem funny at first, these cats are actually exhibiting a behavior called “head pressing”, and it’s no joke.

What is Head Pressing? 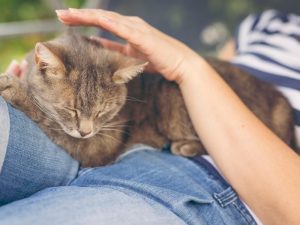 Head pressing isn’t a sign of one particular neurological disorder, but it is always a sign that you should bring your cat to see us immediately. In cats, it can be a sign of various different disorders, including:

What Do I Do If My Cat is Head Pressing?

After reading all of this scary information, you may be feeling pretty worried about your cat. If you think that your cat is head pressing, then it’s important to bring them to the vet right away. We’ll perform a series of tests to diagnose and treat the issue.

You may see us give your cat an in-depth eye exam to look for anomalies at the back of the eye that reveal irregularities in the brain or infectious or inflammatory diseases. We may also perform blood pressure tests and a urine analysis to find out if your cat has high blood pressure, problems with metabolism, or toxins in their system.

No matter what is causing your cat’s head pressing behavior, it’s important to bring them to the vet immediately so that we can treat them and they can go back to being the healthy, happy, energetic cat they’re meant to be.

Get in Touch with the Catonsville Cat Clinic

has been a fixture in this community for 25 years now. Dr. Nesbitt is not only extremely qualified, but she also takes a vested interest in the well-being your kitty. Whether you have health concerns for your cat, or it just needs a checkup, bring them by and have us take a look.

Categories: Common health conditions | Tags: head pressing in cats, health conditions, and illness
This entry was posted on Thursday, May 20th, 2021 at 10:16 am. Both comments and pings are currently closed.